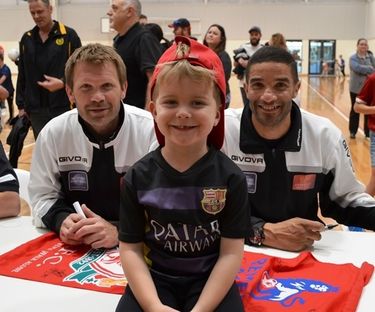 They came. They saw. They signed autographs (and lots of them).

The soccer stars of Manchester United and Liverpool sure kicked goals when they visited the City of Playford on Saturday. Elizabeth Vale Soccer Soccer Club's Benjiman Van Ross Malen with former Liverpool players Bjorn Tore Kvarme (left) and David James. Photo: Rob McLeanThe visit was part of national Battle of the Reds tour that saw former players from two of the English Premier League’s biggest clubs playing a tournament in Adelaide on Saturday night.Invitations to the meet and greet at the John McVeity Centre were extended to junior players from clubs within Playford and they jumped at the chance to mix with the Legends. ^^ The Q&A session featuring the Manchester United and Liverpool players.After a Q&A session players signed anything and everything that came their way from their young fans.Although Liverpool Legend David James drew the line at signing one particular object – a Munno Para City Soccer Club playing shirt.“Is this your match shirt, do you wear this in games,” James asked with a laugh.“I can’t sign that, you’ve got to wear it for the rest of the season."

Manchester United’s Quinton Fortune was also popular with the kids, playing a skills game with a large group, while other players also had a kick around.The event concluded with a group photo that all in attendance will never forget.

^^ Check out our photo gallery from the big event.