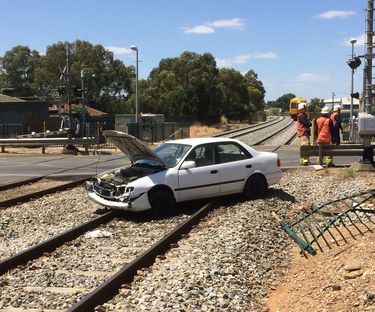 Anderson Walk open again after accident. Updated: 3:39 Photo: Ian Mason A car crashing onto the Gawler train line at Smithfield this afternoon caused delays to public transport and local motorists.The white sedan ran through a fence at the Anderson Walk level crossing, blocking the train line.SA Police reported that the driver was removed from the vehicle and was safe.Adelaide Metro SA reported that trains between Gawler and Salisbury experienced delays, while buses in the area were also impacted.Meanwhile, police were also advising delays for motorists on Anderson Walk.However, the intersection and public transport routes were quickly opened again.