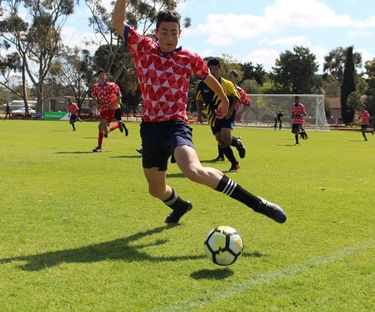 Unlike a traditional soccer carnival though, there was music pumping from the Northern Sound System, as well as a plethora of activities for the students to enjoy throughout the day.

Triple M and even Adelaide United turned out to get involved with the fun, with high-profile W-League players Emily Condon and Emily Hodgson speaking to the students.

The 8/9 girls from Playford were strong all day, only losing once, with Salisbury East coming from second-bottom to win the grand final.

In the Year 10 boys, the action was more evenly spread, with The Avenues and Craigmore High School clashing in an epic match. But, ultimately, it was Salisbury East that won the title.

The main centrepiece of the day was the 8/9 boys, whose grand final ended in a penalty shootout between Salisbury East and Roma Mitchell College, with the former taking the win. Event co-ordinator Jesse Rogerson said “the event was a huge success, it’s been a fantastic day for football and for the community here in Playford”.

The day's champions were:

The annual tournament is a collaboration between Adelaide United, Playford International College and the City of Playford.