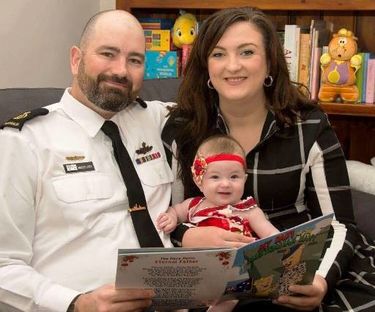 Share this article
When partner was away from home on sea trials with the Royal Australian Navy, Hayley Boswell had the seed of an idea.

When partner was away from home on sea trials with the Royal Australian Navy, Hayley Boswell had the seed of an idea. That seed grew into something bigger than even she could have anticipated. ^^ Former Craigmore High School students Hayley Boswell and Bradley Lynch, with daughter Evie, for whom the book My Dad's in the Australian Navy was first written.

Photo: Michelle Hopkins When Chief Petty Officer Bradley Lynch sailed off for the first time after daughter Evie was born, Hayley crafted a story to explain “why Daddy was away”.It’s a story the former Craigmore High School students knew would resonate with partners of armed forces members across Australia.So the couple decided to self-publish My Dad’s In The Australian Navy and, from there, the idea just blossomed."We started getting orders from friends to make books for their kids," Hayley told ABC Radio Adelaide.Initial forays into advertising the original book exceeded expectations and resulted in Hayley developing books for families of each branch of Australia’s armed forces.

Not only that, but the books have been reconfigured for families with either Mum or Dad in the armed forces and are being sent to homes across the nation. “I’m so proud that something I’ve written is helping defence force families and their children to deal with what can be a tough time for all,” Hayley said. “It’s an honour and a privilege.”