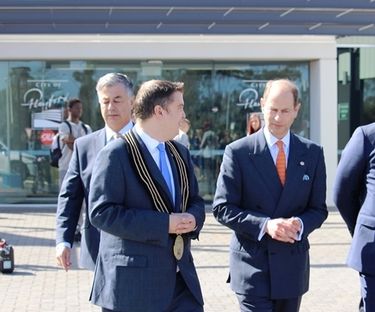 Share this article
For the eighth time in its history, the City of Playford has hosted a Royal Visit.

For the eighth time in its history, the City of Playford has hosted a Royal Visit.

As part of a three-day visit to South Australia, Prince Edward, the Earl of Wessex attended the John McVeity Centre at Smithfield Plains to see local, talented young basketballers in action.

The basketballers participate in the HOOPS 4 Life program at the City of Playford-owned recreation centre.

In a special ceremony, the prince unveiled a plaque recognising 30 years of HOOPS 4 Life and its involvement with the Duke of Edinburgh Awards.

“At the end of the day, we (the Duke of Edinburgh Awards) are not changing anything that HOOPS 4 Life is doing, but hopefully we can give the young people of the community greater accreditation for the great work young people do outside of the classroom,” the prince said.

“And if that helps them out with future career opportunities, much the better."

In welcoming the prince to the community, the City of Playford’s Mayor Glenn Docherty praised programs such as HOOPS 4 Life.

“The City of Playford is committed to supporting and fostering the development of our youth,” Mayor Docherty said.

“We have a high percentage of youth residing in our Council area in comparison to greater Adelaide, so it is encouraging to see the success of HOOPS 4 Life in our community, and I am excited to see the long-term benefits it brings.”

Thomas Watts was among the program participants who met the prince.

“He was really nice, an easy-going bloke,” Thomas said.

Thomas’ father, Adrian, who is currently recovering from a seriously broken leg, also met with the prince.

The prince, who was in a very informal mood during his visit, urged Adrian to remain seated when he approached him.

“I was trying to stand, but he told me to stay seated,” Adrian laughed.

The visit concluded with the Prince sharing morning tea in the YMCA-operated facility with the assembled guests, before heading to the Barossa Valley.