Roosters step out at new home 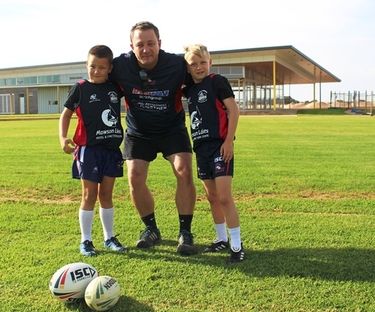 Share this article
The Central Districts Rugby League Club has made the innovative Eyre Sports Park its home, moving into the facility with two other sporting clubs this month.

The Central Districts Rugby League Club has made the innovative Eyre Sports Park its home, moving into the facility with two other sporting clubs this month.

On Sunday, April 22, the club hosted a NRL nines pre-season tournament at Eyre Sports Park, giving the pitch its long-awaited baptism.The tournament featured junior players ranging through four grades from under 12 to under 18, with a senior competition involving five teams also played.

Young club member Callum Pridham is excited about the Roosters’ new home at Eyre, a joint project of the City of Playford and AV Jennings.

“This gives the club some stability and a place to call home and not having to try and find ovals."

Callum, who plays as a lock for Central Districts’ under 18s, is keen to see the Roosters establish new traditions at Eyre Sports Park. Success

The club is the most successful rugby league club in the state, with high numbers of state representation at all levels.

Central Districts hopes its new home ground, plus the Sydney Roosters versus Melbourne Storm match (June 29) and next year’s State of Origin match being played at Adelaide Oval, will see the sport grow significantly in South Australia in coming years.

Progress is continuing on oval number two and the soccer pitch, with the facility’s other partners, Eyre Royals Cricket Club and Northern Wolves Soccer Club, making Eyre Sports Park their playing base as of their next seasons, starting from late 2018.