Roosters cock-a-hoop about NRL in Adelaide 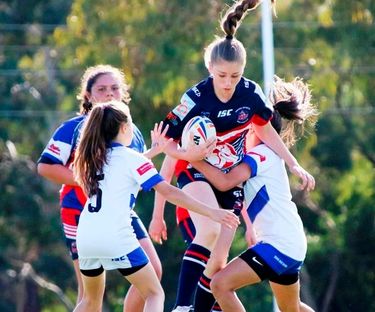 Share this article
Junior rugby league players from Playford will get their chance on the big stage this weekend as part of the NRL action at Adelaide Oval.

Junior rugby league players from Playford will get their chance on the big stage this weekend as part of the NRL action at Adelaide Oval.

Players will feature in a SAPSASA pre-match game;

CDRL under eights will form a guard of honour as the players walk on the field, and play curtain-raiser games;

Roosters under 10s will hold Sydney’s banner, as well as play a half-time game;

17 junior players will run out with the Roosters.

Club publicity officer Nate Frick described it as a fantastic opportunity for the youngsters.“It’s great for the young kids to play in front of a crowd on one of the great ovals in Australia,” Frick said.

“For them to see where they can go in the sport with practice, commitment and discipline is great as well, especially as they rarely get to see the top grade.” Not just child’s playMeanwhile, also attending the game will be 11 of the club’s senior players who fill the bulk of the South Australian side competing in the Combined Affiliated States championship on the weekend.The carnival showcases senior men’s, senior women’s and under 18s teams from South Australia, Western Australia, Victoria and the Northern Territory. ^^ Hard-running Danny Tavita is among 11 Central Districts' players representing South Australia this weekend. There will also be five players in the state under 18s side.Frick said the Roosters are cock-a-hoop to have so many players representing the state, reflecting the club’s commitment to developing its brand ahead of a move to Eyre Sports Park at Penfield later this year. More Roosters reading: Club’s new home, 40th anniversary “We have worked really hard behind the scenes to build a very family orientated club, with good processes and administration and we are seeing a return on that investment,” Frick said.“This year we’ve had 10 senior players come looking for us based on the work being done behind the scenes to provide a great club for our community.The Sydney Roosters take on Melbourne Storm from 7pm on Saturday night.Eyre Sports Park will boast SA’s first NRL-approved playing facility, thanks to a partnership between Playford Council and AV Jennings. ROOSTERS STATE STARS: Adam Levi, Lekah 'Sammy' Tanaka, Matthew Smith, Jeremiah Hill, Brandon Purcell, Jake Christie, Jake Busby, Ashraf Mohammad, Danny Tavita, Andy Roberts, Harrison McKenna.