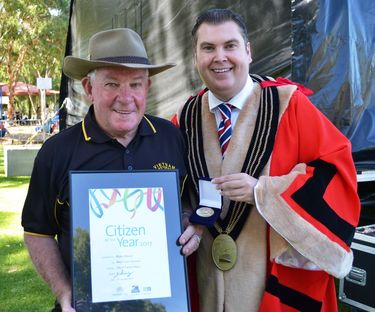 Share this article
Robin Bruce has been named the City of Playford’s Citizen of the Year for 2017.

Robin Bruce has been named the City of Playford’s Citizen of the Year for 2017. Despite considering himself a relative newcomer to the Playford community, Robin Bruce exemplifies all the spirit of the volunteer ethos.

A Vietnam veteran, Mr Bruce is self-effacing and modest, saying “I’m only a newcomer here, I’ve only been here for 36 years…”.

When presented the Citizen of the Year award by Playford Mayor Glenn Docherty on Thursday, rather than his own achievements, Mr Bruce talked about his family.

“It’s a very pleasant day for me here today…my eldest boy and his wife are down from Brisbane, he didn’t know this was happening and neither did I,” he said.

“I’ve also got my youngest boy and his wife and his two kids back from London, for good. And my wife will be very, very happy. It’s a wonderful day.”

Mr Bruce is a life member of Playford Greening and Landcare Group, is a volunteer with the City of Playford’s graffiti removal team, is a long-time member of Smithfield Plains Neighbourhood Watch and is involved with the Playford Tavern Social Club. The other Australia Day award recipients in Playford were: Dylan Davies (Young Citizen of the Year)

A 2016 year 12 student at Mark Oliphant College, Dylan has run art sessions with students, as well as, through his studies, supporting anti-bullying programs. He also volunteers with the Playford Library: "Having wonderful teachers at Mark Oliphant College is the best thing, I couldn’t ask for better. Going to the Playford Library has also been a wonderful journey for me. I’ve been there for seven years now and it’s fantastic. All the people that you meet become your family and your true friends. This year my goal is to help as much children and families as possible.” United We Read (Community Group of Year) Operated by United Way, United We Read is a free monthly book program delivered to children aged between birth and five years old in Elizabeth Park and Elizabeth Downs. The award was accepted by Kerry Davies: “Who I really want to thank is the community that has come together to support this program. We can’t do this without this community and there is a really large team of volunteers that support this program. Finally, I’d like to say to the parents and families receiving these books, enjoy these books and read them to your children every day. And, to those people who aren’t receiving books, you still need to read to your children every day. It’s a wonderful thing to do with your children it builds family bonds but it also builds the brain development of your children and, in building that, you’re building their future.” Elizabeth Football Club (Sports Club of Year)

The Elizabeth Football Club celebrated its 60th anniversary in 2016. Mick Platten accepted the award on the club’s behalf: "Thank you to the council, the Playford Council. They do a great job for all sporting clubs. It’s actually an honour to win this award and we’re very proud.”