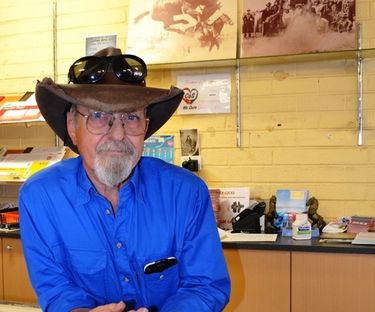 Share this article
Buckjumpers, roughriders and photographs have made a local business owner’s life what it is today.

Buckjumpers, roughriders and photographs have made a local business owner’s life what it is today. ^ Ian 'Robbo' Robertson is a rodeo icon. Photo: Rob McLean There’s a reason Ian Robertson’s Angle Vale shop is called Robbo’s Snack & Chat - people from all over Australia can’t help but pop in to speak to the famous owner.

Robbo, as he is better known, is an icon of the rodeo scene, with his action photography known far and wide.

And when you stand at the counter of his shop, two photographs on the rear wall immediately draw the eye.

While not the work of Robbo, the photos are famous rodeo images that always spark the interest of those who see them.

“People always stop in and chat about the photos,” Robbo said.

The main photo, of Curio (pictured below) being ridden by Allan Woods and taken by Keith Steven, has its own personal connection for Robbo.Curio was a brute of a horse that no one could ride, but Woods was the first to take the horse to full time (10 seconds in those days), with Steven’s photo capturing the moment spectacularly.

If you look carefully, peaking above the enthralled crowd on the right-hand side is Robbo’s father, Allan, a rabbit-trapper who was also well-known on the rodeo circuit.

So it’s little wonder that rodeo is in Robbo’s blood.

Robbo, himself, was even on hand to see the great Curio, which was immortalised with a statue at Marrabel, in action – he was too young at the time to have any recollection of the day, but it’s enough to say he was there.

The other photo on the wall features the famous buckjumper Cloudbuster being ridden by Dick White at the Carrington Rodeo in 1954.

Legend has it that the image is the most sold rodeo photo in the world, even being used by the Calgary Stampede.

Although, due to work commitments, Robbo stopped competing in rodeos in the 1960s, he has maintained his involvement with horses not only through his photography business but also as a breaker.

“We were brought up on the land and I’ve been working with horses all of my life,” Robbo said.

“I’ve always just had an affinity for them.

“The old man told me before he passed away that I broke my first horse at the age of eight.”

Robbo has had his business based at Angle Vale for nearly four years, but there’s no doubt where he’d rather be…

“I just wish I could be out of here and on road a lot more,” he laughed.

Robbo’s Snack & Chat is located on the corner of Heaslip and Angle Vale roads, while you can find Robbo’s rodeo photos on Facebook - they're well worth a look.