Remembering our Anzacs of WWI 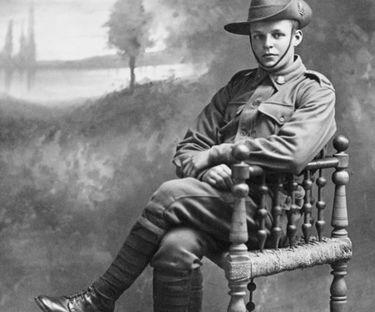 Share this article
This Anzac Day we remember some of the brave men and women from Playford who served our country in World War I.

Anzac commemorations provide us with an opportunity to remember those who have fought and served in all wars; conflicts and peace operations, and to especially remember the more than 100,000 who have given their lives in service.

This year we remember some of the brave men and women of Playford who served our country in World War I (WWI).

No place was unaffected by war, with the City of Playford no exception.

More than 170 people from the Playford area, which at the time had a population of around 2,500, enlisted in the Australian Imperial Forces (AIF) during WWI, with many of these soldiers sadly not returning home.

Allan Coker was raised in the Playford Area of Gawler Plains. On 29 February 1916, at 35 years of age he enlisted in the AIF.

He was attached to the 5th Pioneer Battalion and left Adelaide on the 11 April 1916 for Marseiles, where he spent the next two years fighting in the muddy trenches on the Western Front.

Coker was sadly killed in action on 3 August 1918 at Morlancourt France.

Bravery and a willingness to fight for his country ran in the family, with Coker’s nephew Herbert William also enlisting in the AIF and fighting at Gallipoli.

Coker is remembered and recognised locally, with his name on the Salisbury Reserve Memorial.

Edward Blackman was born in Smithfield on 14 October 1898 where he grew up with his parents and seven siblings on Jane Street.

On 5 February 1917, at the age of 18, following in his older brother Alfred’s footsteps Edward enlisted in the AIF.

At the time of Edward’s enlistment, he was a cleaner for the South Australian Railways. He had been a cadet on the volunteer force for the AIF but had previously been rejected for war service due to his small physique.

After being enlisted for ten months and travelling to England, Edward was redirected from his 8th Training Battalion to Havre, France to reinforce the 48th Battalion. Only four months later Edward was killed in action in Dernancourt France at the age of 19.

Fortunately, Edwards older brother Alfred survived the war. He was welcomed home to Smithfield where a special social gathering was held.

The Shillabeer family are well known in the One Tree Hill area, arriving early in the colony’s history.

Sadly, both Andrew and his son Albert died in battle during WWI. They were among 24 young men from One Tree Hill, Virginia, Smithfield and Penfield who died in action during the Great War.

A member of the 48th Australian Battalion, Albert Shillabeer died during the battle of Bullecourt, France, in 1917 at the age of 22.

Unfortunately Andrew also died in action, however nothing is known of how he died. What is known is that he was brave and willing to fight for his country, as were his two sons.

Samuel Shillabeer received a gunshot wound to his right buttock while fighting in his first war in France. He sailed to England where he recovered in Horton War Hospital, London. After his recovery he returned to France to resume fighting.

Once the war ended he returned to Australia as a hero. He married the love of his life May Ena Wackett and lived in Norwood until he passed away on the 19 of June 1962, aged 63.