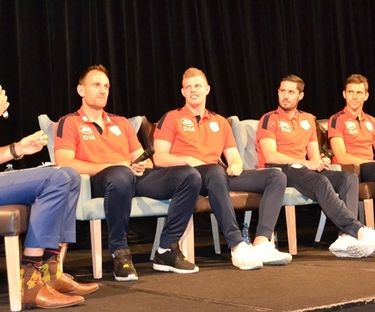 Share this article
Adelaide United and the City of Playford hosted the Reds’ first Players’ Night last night and no question was left unasked.

Adelaide United and the City of Playford hosted the Reds’ first Players’ Night last night and no question was left unasked. ^^ Nova 919's Jarrod Walsh (left) talks football with AUFC players Eugene Galekovic, Jordan Elsey, Dylan McGowan, Isaias and Tarek Elrich. Photo: Rob McLean When your A-League title defence doesn’t quite go to plan, it can be easy to hide and avoid answering the questions all of the supporters want to ask.But, skipper Eugene Galekovic, Tarek Elrich, Isaias, Dylan McGowan and Jordan Elsey were far from shy about the team's predicament when Nova 919’s Jarrod Walsh asked some tough questions about the Reds’ form at Wednesday night’s event at the Playford Civic Centre.

The skipper admitted the season had been a tough one, particularly following last year’s glorious double, which was completed in front of 50,000 people with a 3-1 victory over Western Sydney at the Adelaide Oval on May 1.

As for the skipper’s future, he’s not making any predictions, at this point. Meanwhile, Jordan Elsey talked about how he’s coping with his second major knee injury, revealing he has a great sense of humour. On the lighter side, the AUFC stars nominated their least-favourite A-League players, with one player gaining the most attention. Meanwhile, Isaias discussed coping with the language barrier when he first arrived in Australia.

And the players talked about pre-game rituals. Weird ones, at that.Thanks to Adelaide United and the players for a great night, and also to Jarrod Walsh for acting as MC. The Reds’ next match is against Central Coast Mariners in Canberra on Sunday (4:30pm), while their next game at Coopers Stadium is against Perth Glory on 10 February. Adelaide United also starts its Asian Champions League title tilt at home on 22 February.