Reds help students get in gear 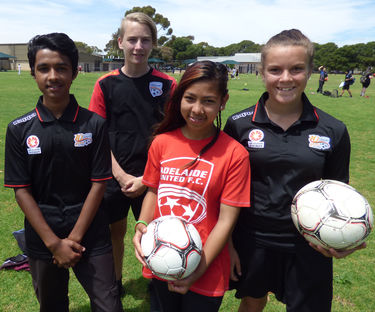 Share this article
The connection between Adelaide United and the City of Playford is continuing to reap benefits for local football players.

The Playford International College recently received a donation of playing gear from the Elizabeth-based A League club for students involved in its Soccer Academies.

School staff member Jesse Rogerson said the donation from Adelaide United, which included full playing kits, training shorts, singlets and tops, is very much welcomed and will be worn with pride.

“The students will wear the full playing kits when they play in different competitions next year,” Mr Rogerson said.“Students were also presented with school bags, training shorts and supporter t-shirts in recognition of the commitment, team work and skill development they have demonstrated over the 2016 school year.

“Some of the kit will also be held over for when the new academies start up in 2017, so those new students will be provided with similar opportunities.”

Mr Rogerson (pictured left) added that Playford International College is highly appreciative of the opportunities that Adelaide United has provided to its students this year and is looking forward to building upon this close partnership into 2017 and beyond.

“We are excited to work together to be a leader in providing footballing opportunities for our students at school and in the wider community and developing the growth of the game in South Australia,” Mr Rogerson said.Adelaide United officials said they were delighted to contribute to the ongoing development of the local teens.“The club is delighted to have been able to help out such a great cause and such a worthwhile initiative,” a spokesperson said.