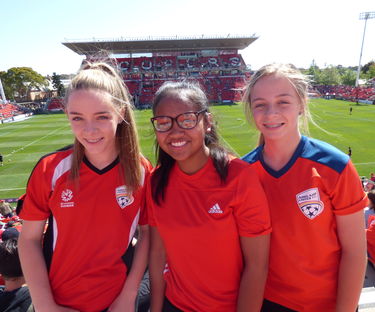 Thanks to a partnership between Playford Council and Adelaide United Football Club, a group of Playford International College students attended professional football matches at Coopers Stadium recently. The students witnessed a high-class W League match, which saw Adelaide United draw three-all in a thrilling contest with the Melbourne Victory. Sadly, in the A League match, Central Coast Mariners extended the Reds' slow start to the season with a 2-1 triumph, their first win since last season. Playford International College staff member Jesse Rogerson said the students were thankful for the opportunity, with many attending their first Adelaide United matches. Mr Rogerson added that it was also a great opportunity for the students to see women’s football in action and show that there is a pathway to the higher levels for young women taking on the sport. The school’s attendance at the match was organised as part of the City of Playford’s commitment to maintaining a healthy community, while Adelaide United was pleased to support students in the community in which its training facility is based.