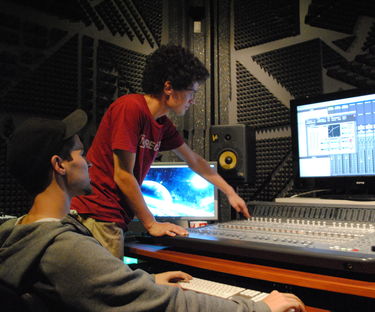 Share this article
Local talents DC &amp; DRAGZ and Playback 808 are revving their engines in preparation for the Clipsal 500 after-race concert.

Local talents DC & DRAGZ and Playback 808 are revving their engines in preparation for the Clipsal 500 after-race concert. Local party boys DC & DRAGZ and creative movement, led by DyaspOra, Playback 808 will support Australian hip-hop royalty the Hilltop Hoods at the Clipsal next Friday (3 March). DC & DRAGZ teamed up in 2015 at Playford’s Northern Sound System and haven’t looked back since laying down their first tracks with N1 Records. “Playing at the Clipsal 500 is an amazing opportunity for us to get our name out there to people who may not know the Adelaide hip-hop scene,” DRAGZ said. The duo is set to release its first EP, Goonsack Boom Bap! on March 31.

^^ DC & DRAGZ on the mixer at the NSS “Our inspiration for this album was goon (boxed and cheap wine), and we were very lucky to work with local hip-hop artists K21 and Trials from The Funkoars who gave us great tips and tricks for producing our album,” DC said. Playback 808 was also among the four winners of the Clipsal 500 - Bands on Track competition and will be playing alongside DC & DRAGZ next Friday (3 March). Playback 808 creator Gabriel Akon, aka DyaspOra, started a movement to support local multicultural hip-hop artists in Adelaide. “Adelaide has such a great talent pool of hip-hop artists. However, we don’t hang onto them and support local artists performing,” he said. Playback 808 has been part of the scene for seven years and the boys are really pumped to be playing to such a large audience at Friday’s after-race concert.

“Playing at the Clipsal 500 will be one of the biggest crowds we have played to, we are looking forward to it and after that we will be touring in Melbourne mid-year,” DyaspOra said.

Want to see more check out the upcoming gigs:Clipsal 500 – After Race Concert