Plaza launched with a splash 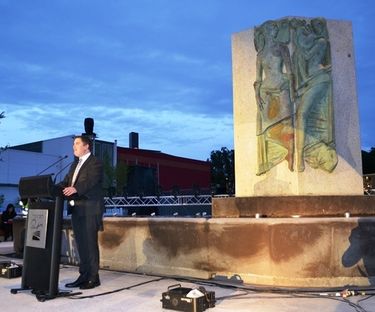 Share this article
More than 700 people packed the Prince George Plaza to celebrate the official launch of the CBD of the North project last Friday.

More than 700 people packed the Prince George Plaza to celebrate the official launch of the CBD of the North project last Friday.

^^ City of Playford Mayor Glenn Docherty officially launches the first stage of the Playford CBD, Prince George Plaza, on Friday night. More photos below. Photos: Rob McLean “The opening of the $5.5 million Plaza is a significant milestone, marking the first completed element that makes up our northern CBD project,” City of Playford Mayor Glenn Docherty said.“The Plaza is the new civic heart of Playford and a dynamic community event space.”

Mayor Docherty officially switched on the restored Windsor Green fountain, which was originally unveiled by Her Majesty the Queen on 21 February, 1963.

“The fountain symbolises – fire, earth, birth, rebirth and continuing life – and how fitting that is as we transition into a new era,” Mayor Docherty said.

Beneath the light of a full moon, the Adelaide Symphony Orchestra delighted the crowd, taking them on a magical journey through a repertoire of well-known classical numbers. The evening finished with an urban light project by the team at Northern Adelaide Senior College.

“We now look towards the future of our city with the northern CBD project a key driver in the future prosperity of this community,” Mayor Docherty said.“The Playford CBD will become a gateway for people to explore and connect with all that our city has to offer.“The plaza opening is just the beginning of what’s to come here in Playford.”

Further developments include the construction of a $30m medical hub, a multi-storey car park, retail tenancies, an office building, as well as the proposed Playford Arena, a world-class entertainment and ice complex, and a proposed 4.5 star hotel development. Enjoy a gallery of photographs from the night: