Playground gets down with nature 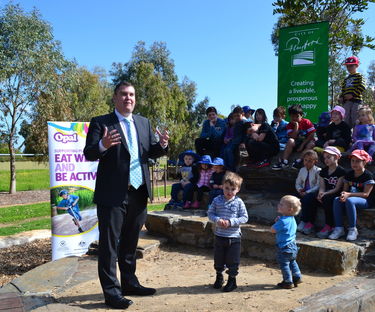 Share this article
<p>&nbsp;</p><p>With the cutting in half of a ceremonial stick at the foot of Challenge Mountain, the Pipkin Reserve nature play space was opened at Elizabeth East on Wednesday morning.

With the cutting in half of a ceremonial stick at the foot of Challenge Mountain, the Pipkin Reserve nature play space was opened at Elizabeth East on Wednesday morning.

Challenge Mountain is the centre piece of the facility, which has been upgraded as part of the City of Playford’s program to improve playgrounds across the council area.

City of Playford Mayor Glenn Docherty and Anglicare’s acting chief executive Jackie Howard officially opened the playground, which had been designed with feedback from children at the Elizabeth East Primary School.

“It’s really important that we have super-cool places to play and that’s why in the City of Playford we wanted to have a modern playground next to the nature play space, because we know the kids of today, like my kids, like to play on the computer, play inside, but we’ve got to get back to nature,” Mayor Docherty said.

“We want you to get out there, get muddy, do some climbing, play with twigs, look at the trees, look at the creek and look at the water, because it’s really, really important that we get to play in nature.

“We want you to get really excited about nature, because that’s where we live.”

Ms Howard was pleased to be part of the launch.

“I’m really pleased that this is an ongoing collaboration between Anglicare and the City of Playford and the work that we continue to do together and, particularly, that our Communities for Children team (are doing),” Ms Howard said.

“Their focus is to really create a strong, child friendly community that understands the importance of children and builds the community capacity and to improve the health and well-being of children at a community level and, I think, this is going to go a long way to help do that.”

The nature play space can be located the corner of Pipkin and Martin roads, Elizabeth East (see map below).