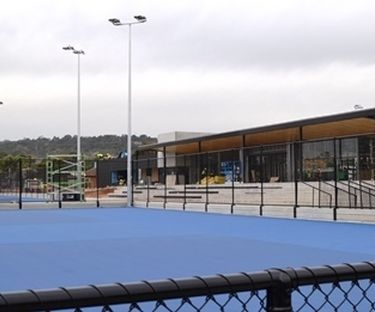 Share this article
The Playford City Tennis Centre has been described as world class and amongst the best in Australia by the facility’s new manager.

TennisGear Management has been appointed to operate the Playford City Tennis Centre, which is expected to be officially opened in September this year.

The company’s director Mark Bloomfield visited the still-under-construction site recently and was excited by the benefits the tennis centre can bring to the region.

“It’s absolutely wonderful to see a world-class tennis facility, one of the best I’ve seen in Australia, and I’m absolutely delighted to be operating it,” Mr Bloomfield said.

“We’ll be activating a wide range of programs from coaching fixtures to social tennis and school activities to encourage local communities and local groups to visit and use this facility.” Tennis SA Come & Try Day

- FREE for all ages

As part of the project, The Grove Tennis Club will be relocating from the Bicentennial Tennis Centre, which has been sold for the expansion of the Playford City Health Precinct.

“Council administration has been working closely with the club to support their transition and establishment at the new centre,” City of Playford Mayor Glenn Docherty said.

“The new club committee, led by stalwarts Rick Taylor (president) and Gloria Dennis (secretary), have been commendable in guiding the club through this period and are now looking forward to this significant new chapter in the club’s history.” Who is TennisGear?

A national company with a $3.9M per annum turnover;

^^ A video of the soon-to-be-completed Playford City Tennis Centre.