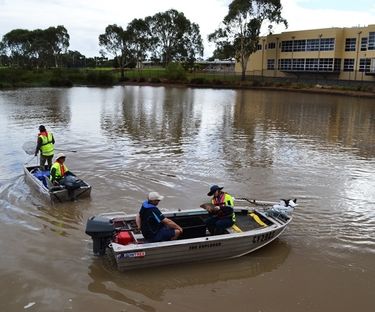 Share this article
The City of Playford has declared a war on the noxious pest fish, European carp.

A further 5000 smaller fish and 60 larger fish were removed from the North Lakes Golf Course.

City of Playford Mayor Glenn Docherty said the response is due to the unwitting introduction of the freshwater pest into our pristine wetlands over several years.

“We need to send a message out to the community not to fish in them, go yabbying and definitely not to dump introduced species.”

Known for their bottom-feeding habits, carp grow up to around seven or eight kilograms and stir up sediments and effectively ‘muddy the waters'.

“Council is determined to continue eradicating the pest in the most natural way – namely a proven natural solution stemming from the root of a tropical plant,” Mayor Docherty said.

Rotenone does not effect non-targeted aquatic species such as yabbies, turtles, ducks and birds.

These wetlands are crucial to harvesting storm water from the Smith Creek catchment.

The water is then stored in aquifers before being used to irrigate Council’s sporting fields, reserves and also schools, reducing the costs to ratepayers of managing these facilities.

Playford is one of the few councils in the nation to secure a permit with the Australian Pesticide and Veterinary Medicines Authority to apply the Rotenone product to constructed wetlands for managing pest carp populations.