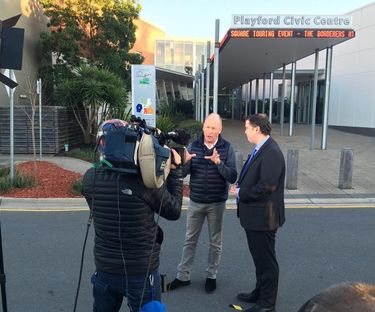 The City of Playford’s Smart City $500-million project has gained national attention following an appearance on the Nine Network’s influential morning television program, Today. City of Playford Mayor Glenn Docherty discussed the Smart City concept with Today’s respected finance journalist Ross Greenwood. Greenwood was particularly taken with the Smart City idea, given the need for the northern suburbs to transition away from manufacturing due to the impending closure of Holden and support industries at Elizabeth.

He said the Smart City’s high-speed 10 GB digital plan will be welcomed by stakeholders. “You could just lay down and die, but you’ve got to have the hope and, of course, there are a lot of people working behind the scenes to make certain there are jobs around the place,” Greenwood said. “They’re going to have the broadband here working 10 times the size of the National Broadband Network, which is one reason why a lot of those business/universities will want to come to these areas,” he said.

The Smart City concept, centered around the Prince George Plaza hub at the Playford Civic Centre, has a projected initial investment of $100 million from developers.

As part of the development a 4.5-star hotel is planned for the site, along with accompanying shops, while an entertainment centre and multi-storey car park will also be developed, creating local jobs during and after the construction phase. City of Playford Mayor Glenn Docherty told Greenwood that council is taking control of “its own destiny”.

Mayor Docherty told the national audience that companies such as Hewlett Packard and ACH, along with South Australian universities are involved in the “digital project”. “They are coming here because they know there’s great hope, good workers and they know they can invest in the northern suburbs of Adelaide,” he said.