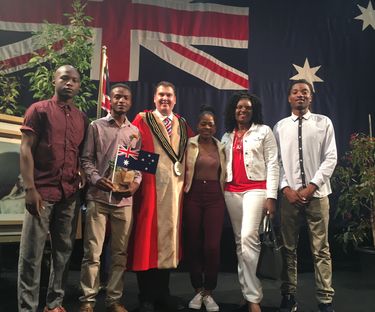 Share this article
On Australia Day the City of Playford welcomes its newest citizens, playfordnews.

On Australia Day the City of Playford welcomes its newest citizens, playfordnews.com introduces you to some of them.

^ Seventy five people were conferred with Australian citizenship at the Playford Civic Centre on Australia Day. A gamer, a government advisor, a young mother and a brave refugee.They’re four people with vastly different backgrounds, however on Australia Day this year they will come together, along with 70 other Playford residents, to become our nation’s newest citizens.The City of Playford takes great pride in welcoming and conferring people from all corners of the globe, who have chosen to live, work and play in our fast-growing community. ^ Tonny Kristensen found love in South Australia. For 40 years Tonny Kristensen lived quite happily in southern Denmark and drove trucks for a living.Five years ago his life took an extraordinary turn when he was introduced to a South Australian woman while playing an online game called Mafia Wars.Their friendly chats evolved into a long-distance relationship until finally, the pair met and eventually married in Adelaide.Tonny now works as a delivery driver and is proud to call Playford home. He has also given up gaming. “There’s no need,” he said, “Everything I need is right here”. ^ A street scene in Bhutan, from where Bishnu Biswa's family fled. Bishnu Biswa was only two when her family fled a bloody conflict in the small Himalayan country of Bhutan. The family were taken into a refugee camp in nearby Nepal, but if she was hoping for a better life she was to be mistaken. “We were forced to spend (the) next 20 years in a UNHCR camp. We weren’t living, we were barely existing” Miss Biswa said.Her ticket to freedom came from the Australian government in 2012; a new life and a decent home in Adelaide.The 28-year-old has never looked back. Her family settled in the Playford area and two months ago she secured work at a meat processing plant.

^ Valentina Sidorenko came to Playford from Kazakhstan. Valentina Sidorenko didn’t flee persecution in Kazakhstan but never really felt the former Soviet colony was a place she could call home.“I wanted a life with less discrimination and for people to have the same rights,” she said.In her search for happiness Valentina and her husband, Javid Javanshir, visited Australia to “have a look around” and she instantly liked it. The pair made the decision to sell their spare-parts business and moved to South Australia - settling in Elizabeth South.Tomorrow, both Valentina and her husband will be conferred as Australian citizens. ^ Tanalee Smith came to Australia from Canada. Canadian-born Tanalee Smith spent more than 12 years as a foreign correspondent covering conflicts and crises across Africa, Asia and the US before, as she put it, “I met a nice guy from Adelaide, fell in love and…here I am”. After completing further studies in public sector management, Tanalee’s broad skill set was snapped up by the State Government where she now works as a senior media advisor. She’s also proud to call Playford home.“I appreciate Playford’s diversity; it is clearly a very welcoming neighbourhood to people of all backgrounds, countries and religions,” Tanalee said.

“I also brag to others about Playford’s library and its current and timely selections.

“I am excited about the new developments being planned, which I think will be an economic and reputation boost for the area, and as a Canadian I am so eager for the proposed skating rink.” Photos from the City of Playford citizenship ceremony held on Australia Day.