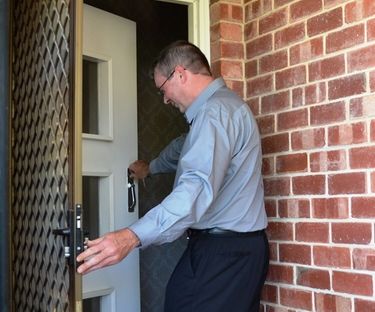 However, until recently, he’d never been invited to be on hand as a ratepayer unlocked the doors to their new home for the first time.

That was until one of Playford’s newest citizens came along.

Locky Seimers recently purchased his first home, at Elizabeth Downs, and invited the Mayor along for the occasion.

“I just wanted to make it a bit special, entering my home for the first time,” Locky said.

“So I invited the Mayor along, expecting a ‘no'.

“If I can try it on and get something exciting happening, I will try it.”

For his part, Mayor Docherty was delighted to be a part of the occasion.

“The Playford community is a diverse community and we embrace those who want to move here,” Mayor Docherty said.

“Lachy is making a new life here in Playford and we’re proud to have him on board.”

The three-bedroom home gives Locky, who works in Wingfield, an opportunity to bed down some roots within easy access to work and recreational activities.

A former Riverlander, Locky was also attracted by the City of Playford’s vision for the future, highlighting that the Smart City project was an added incentive for him to move into the area. ^ City of Playford's CBD of the North project proved enticing for new resident Locky Seimers.

“Our population is growing and we, at the City of Playford, are doing everything we can to take our ratepayers and residents confidently into the future,” Mayor Docherty said.

“The Smart City project is just one of the measures we’re taking to create jobs and drive this community forward.”

The Playford CBD is being built at Elizabeth and will feature a digitally connected city of the future, which will include office, medical, hospitality and recreational developments.

The City of Playford is one of the fastest growing communities in the nation, with the population projected to reach 91,859 people this year, according to Profile id.