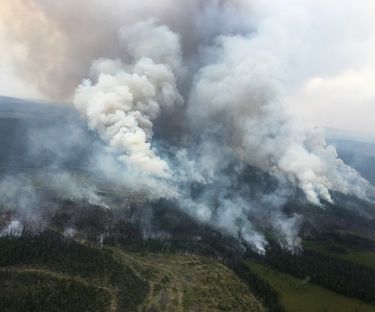 Share this article
South Australia’s no stranger to bushfires, so when Canada’s Cariboo region was threatened by wildfires local CFS volunteers answered the call - in a timely reminder as we approach our own fire season.

South Australia’s no stranger to bushfires, so when Canada’s Cariboo region was threatened by wildfires local CFS volunteers answered the call - in a timely reminder as we approach our own fire season. ^^ The fires, in thick Canadian forests, were hard to get access and some may burn until extinguished by snow. Photo: Supplied.

Smithfield business-owner Gerry Thomson, a 35 year CFS volunteer, was among three South Aussies sent to British Columbia (BC) to fight the wildfires.

“This is the first time the SA CFS has ever sent a crew over to Canada and it shows that we’re capable on the world stage and have that capacity,” Gerry said.

^^ Three CFS members Karen Philp (left), local businessman Gerry Thomson and Alison Martin were on the ground helping the Canadian firefighters with the Cariboo blaze. Photo: SuppliedWhole communities were evacuated for up to four weeks at a time while crews controlled and monitored fires in the region.

“The fires were hard to get at because they were in thick forest. Some of those fires won’t go out now until it snows,” Gerry said.

The BC wildfires continue to cause immense environmental damage throughout the Cariboo region, drawing comparisons to the devastation caused by the 2015 Pinery fire that ripped through the Adelaide Plains. “We were working on one fire that had burned for a couple of months and had burned maybe 30 or 40 thousand hectares, whereas Pinery burned about 87,000 (hectares) in an afternoon,” Gerry said.

“It just shows that we need to be mindful if we’re living or driving in these regions (we need to) have a plan in place before something happens,” Gerry said.The City of Playford begins fire prevention work in early October to prepare for Fire Danger Season.

Property owners across Playford are also encouraged to prepare now to ensure they are bushfire ready.

This includes having a bushfire plan in place, clearing excess and dead vegetation and maintaining the area surrounding houses and buildings.

For more information, contact the City of Playford (8256 0333) or visit cfs.sa.gov.auCLICK for more tips on preparing for fire danger season. Gerry Thomson photographed with (above left) Canadian firefighters and (right) Mexican firefighters.