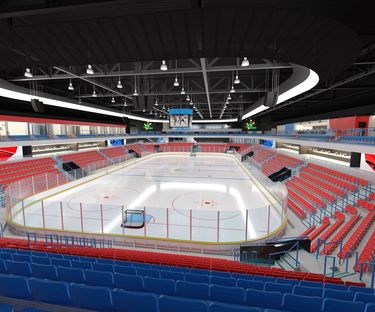 Share this article
Progress is continuing in the City of Playford's CBD of the North project, building South Australia's Next Great City.

Progress is continuing in the City of Playford's CBD of the North project, building South Australia's Next Great City.

Check out the updates on Playford Arena, Prince George Plaza and the Windsor Green Fountain.

A State Government Expression of Interest process to attract developers for an ice sports facility in Adelaide is set to conclude.

The developer of the proposed Playford Arena (pictured above) is submitting a proposal to Government as part of this process.

Council supports this bid as it has long seen potential for a facility to be built as part of the Playford CBD.

The proposed development would meet or exceed the community’s ice sport needs.

The photo (above) was taken during successful testing of catenary lighting at the site.

The Mayor of Playford will open the Plaza at 7pm this Friday night in a FREE community event.

Following a performance by the Adelaide Symphony Orchestra, a spectacular lightshow finale is planned. CBD: Windsor Green Fountain A final component to be installed to the fountain, now in place in Prince George Plaza, is the original plaque unveiled by Her Majesty Queen Elizabeth II in 1963.

City of Playford staff Ryan and Maurice successfully restored the brass plaque, which included separating two plaques joined to either side that commemorate the establishment of the town of Elizabeth and its naming in 1955 by Sir Thomas Playford.

Once successfully separated, the Windsor Green plaque was cleaned and lightly restored – to retain its age and character.

Stage one of the project is scheduled for completion this December and includes spacious clubrooms and the first of three playing fields designed for cricket, soccer and rugby league.