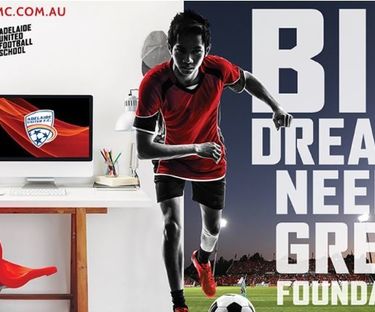 Share this article
Junior soccer players are being sought to represent Adelaide United at a tournament in China, thanks to relationships developed by the City of Playford.

Junior soccer players are being sought to represent Adelaide United at a tournament in China, thanks to relationships developed by the City of Playford.

Adelaide United has been invited to field a team of under 16 players in a tournament in Zibo, China, a location regarded by FIFA as home to the earliest form of football.The Birthplace Cup International Youth Football Championships will take place in October 2017.

Trials for the squad are being conducted in July as part of AUnited’s Football Schools Program, at the club’s Elizabeth-based training ground.

International flights, accommodation, internal transport and meals for the team while in China will be paid for by the Zibo Sports Bureau, as a result of the City of Playford’s civic connections with the Zibo government.

In 2016, the City of Playford signed a Memorandum of Understanding for education and sport exchange and economic cooperation with the City of Zibo.

Mayor Glenn Docherty said the opportunity for Playford teenagers to compete in an international tournament is due to this relationship.

“Sport is an international language and has facilitated a strong relationship between Zibo, the birth place of soccer, and Playford, the home of Adelaide United,” the Mayor said.

“Sporting clubs are an important part of the Playford community, providing second families for young people and a place where they can not only learn new skills and make life-long connections, but can realise their sporting dreams.

“I encourage any young person who has ambition to play football at a higher level to take part in these trials, and have the chance to represent Adelaide United in China.”

Trials are open to talented soccer players from across the state. Click HERE for more information about playing football for Adelaide United in China.

Specially selected students from within the City of Playford have also received scholarships to participate in teh trials during the school holiday coaching program.

Specially selected students from within the City of Playford have also received scholarships to participate in the trials during the school holiday coaching program.