Paving the way for workers in Adelaide’s north. 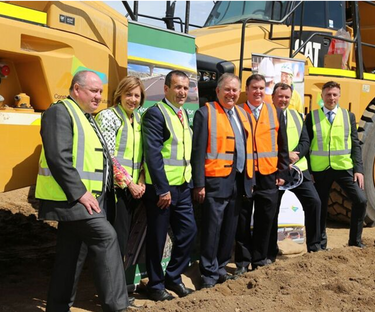 Share this article
Jobs are at the forefront as the first sod on the Northern Connector project was turned.

Jobs are at the forefront as the first sod on the Northern Connector project was turned.^ The City of Playford's Mayor Glenn Docherty (third, from right) at the Northern Connector sod turning this week. Approximately 240 construction jobs are up for grabs for northern suburbs residents over four years after work got under way on the Northern Connector project this week.The jobs pledge came from state and federal politicians, as well as the main developer, Lendlease, who, along with Playford Mayor Glenn Docherty, turned the first sod on Tuesday. The $985-million project will provide a 15-kilometre continuous link for motorists, cyclists and pedestrians from the South Road Superway to the Northern Expressway and Port Wakefield Road.It’ll also be the first major road in Adelaide to be built largely from concrete not asphalt, which the State Government says costs a little more but is cheaper in the long term to maintain.Mayor Docherty said the jobs guarantee for our residents is fantastic and adds it needs to be part of a suite of solutions for workers at Holden and related industries.“That’s why we are investing heavily in Playford’s future with a number of key projects from the Health and Sports Precincts to construction of the state’s second CDB.”Eighty-one people have already started working on the Northern Connector and the project is scheduled to be completed by 2020.For more information, go to Lendlease’s jobs portal Careers - Northern Connector Project.The City of Playford's Stretton Centre also operates a jobs portal.