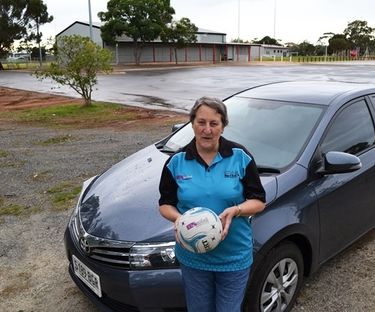 Share this article
Anyone who’s visited Argana Park at peak period will know car parking can often be at a premium – well that’s about to change.

Anyone who’s visited Argana Park at peak period will know car parking can often be at a premium – well that’s about to change. ^^ Elizabeth Netball Association president Lois Scaife is looking forward to the development of more than 80 new car parks at the City of Playford's busiest sports facility, Argana Park.

Photo: Rob McLeanThe City of Playford is expanding the car park at the popular recreation venue through its 2017/18 Annual Business Plan.The Elizabeth Netball Association and Elizabeth Downs Soccer Club will benefit from the $626,000 project, as will local residents, particularly those on Mavros Road.Netball association president Lois Scaife, who began her involvement at the park in the 1970s, said her members will welcome the upgrade.“It means people won’t have to walk in the dark back to their cars, and if we have a carnival at Argana Park it just increases the room available to us,” Mrs Scaife said.The new car park follows ongoing upgrades at the association’s club rooms, including a redevelopment of the all-important canteen.“We are very thankful to Council for doing all of these things for us,” Mrs Scaife said.Elizabeth Downs Soccer Club junior co-ordinator Chris Perry also welcomed the parking expansion, particularly for the safety improvements they’ll bring.“It’s definitely something we’ve been wanting for a while, to help with the overflow we get on big days,” Mr Perry said.^^ Participants at major netball carnivals at Argana Park will soon be able to access increased car parking.The project is one of 11 new or enhanced services announced by the City of Playford in this year’s budget, projects that are being supported by $1 Million in operational savings made by Council over the past year.City of Playford Mayor Glenn Docherty said the upgrade reflects an ongoing commitment to promoting healthy lifestyles.“We know that involvement in sport and physical activity has important health outcomes for our community and this development makes it easier for our residents to access one of our Council’s most prominent sporting facilities,” Mayor Docherty said.More than 80 new car parks will be located at the south-western end of Argana Park (adjacent to the Main North Road), servicing the 22 netball courts and five soccer pitches at the sports ground. More reading: Budget builds for future