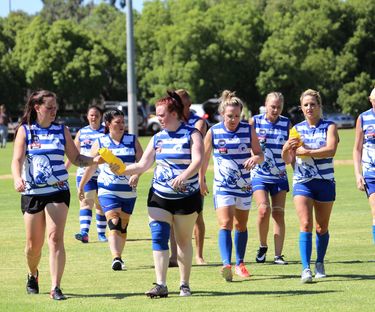 Share this article
They may not yet have&nbsp;a good handle on the game, but if the enthusiasm of Smithfield’s women’s footy team in their first trial game on Sunday is anything to go by their 2018 debut season is going to be a big success.

They may not yet have a good handle on the game, but if the enthusiasm of Smithfield’s women’s footy team in their first trial game on Sunday is anything to go by their 2018 debut season is going to be a big success.

The Panthers are joining other Playford-based clubs Angle Vale and Eastern Park, who they played on Sunday, in forming women’s football teams, with AFLW again proving the lightning rod behind the initiative.

Team manager Tracey O’Neil said it had been an exciting time at the club, with nearly 30 players registering to play in 2018 and everyone at Smithfield keen to get behind the new team.

“We’d seen the women’s game growing and our senior coaches decided they wanted to get a team up and running, so we looked to see if there was any interest,” Tracey said.

And there was plenty of interest, the club finding that many women who had previously not played the sport were keen to be involved.

“We’ve got a lot of players out who’ve never played the game and we’re getting behind the new people and teaching them the sport,” Tracey said.

Players of all skill levels are welcome and Tracey said everyone will get the chance to shine.

“We will make sure that everyone will be playing, this isn’t all about winning for us.”

Apart from introducing a women’s team to the club, Tracey said there is a far more important reason to develop the new team.

“We’ve lost our juniors in past seasons and we hope that by having mums and dads playing at the club we can reinvigorate that part of our club,” she said.