Out of the dungeon, into the spotlight 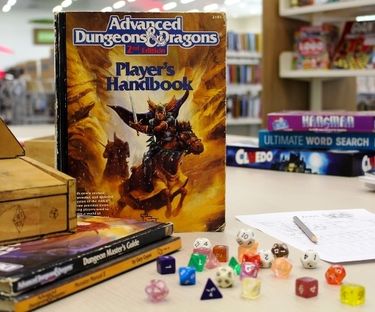 Share this article
“Imagine. You creep stealthily down the rough-hewn corridor, avoiding the slimy water trickling freely down the stone walls and pooling in the cracks between the flagstones." If these words have stirred your imagination and a love of fantastic tales, have you considered the age-old game of D&D?

“Imagine. You creep stealthily down the rough-hewn corridor, avoiding the slimy water trickling freely down the stone walls and pooling in the cracks between the flagstones. You turn and signal to the rest of the party behind you – your Halfling infravision makes you the logical choice to scout ahead of the group. The darkened archway swims with inky blackness – until your extraordinary sight makes out something stirring in the darkness and your ears detect the soft sound of vorpal steel sliding out of a sheath.”

If these words have stirred your imagination and a love of fantastic tales, have you considered the age-old game of Dungeons and Dragons or D&D?

Open to players of all ages and role-playing experience, the game is undergoing a resurgence in popularity in the City of Playford. The local free D&D group, which meets weekly at the Playford Civic Centre Library, has recently doubled its numbers, with two role-playing campaigns under way simultaneously on Saturdays, from 10am to 1:30pm.

^^ Dungeons & Dragons players in action in the US.

“Once Council agreed to the RPG (Role Playing Game) group, people started enquiring through Council’s website, and also through dedicated sites," organiser Seamus Stanek said. "What started with three players increased to five, then another five, and now another 10 players across two games.”

For Seamus, getting involved with D&D was a personal journey to overcome depression, providing him a social outlet. Many of the kids getting involved with the Playford group are finding it gives them an outlet to communicate through a character and interact when they might have otherwise been shy. “A lot of kids are expressing their interest because of the hit Netflix show Stranger Things, which features the game in many episodes,” Seamus said.

“Some players have shown an increase in math skills, due to the addition, subtraction, and multiplication required to translate dice rolls into quest goals.”

So if you think you’ve got what it takes to test your mettle against the Dragons of Desolation as a sword-bearing Paladin, or to take on the Bane of Llewelyn with your mad mage skills, get in contact with Seamus via email.