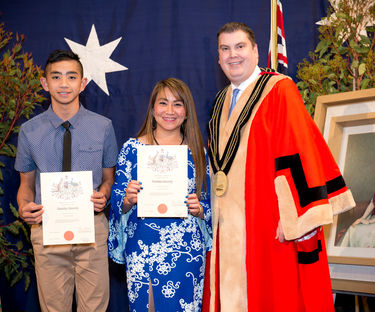 Share this article
&nbsp;The City of Playford welcomed 79&nbsp;new citizens at a function at the Civic Centre this week.

The City of Playford welcomed 79 new citizens at a function at the Civic Centre this week. A total of 24 countries were represented, from diverse nations such as India, United Kingdom, Nepal, Bhutan, Bangladesh, Congo, Indonesia, Iran, Moldova, Myanmar, Philipines, Sudan and Sweden. City of Playford Mayor Glenn Docherty conferred Australia's newest citizens in the ceremony attended by a large support group of family and friends. Congratulations to all who received their citizenship. Our newest Australians also received a selection of native plants produced by volunteers of the Playford Greening group. If you would like to become an Australian citizen, follow this link.