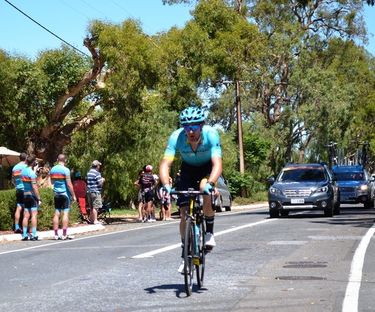 Share this article
One Tree Hill stars as the Tour Down Under passes through town.

One Tree Hill stars as the Tour Down Under passes through town.

A good crowd had gathered in the town’s main street to enjoy the One Tree Hill Country Markets and see the Tour Down Under peloton pass through having entered Playford at Hillbank.

The crowd enjoyed a few false starts as tour vehicles passed through ahead of the peloton, but they were happy to get behind de Vreese as he passed through town out on his own.

De Vreese gamely played the lone wolf in the stifling 40-degree Celsius conditions which saw the race reduced by 30 kilometres to lead the field by several minutes as the One Tree Hill crowd cheered him on.

Soon after, the chasing peloton, accompanied by its support caravan scorched through town in pursuit as the race continued along Blacktop Road.

The Belgian eventually took the King of the Mountain points on the Kersbrook Road, just a few kilometres east of the township, before being reeled in by the pack.

One Tree Hill was awash in green and gold balloons as people lined the street to support the riders.

The Country Market had goods on offer, the Russian piroshkis stall did a roaring trade and singer Leah Holland sang beautifully.

By the time the race had concluded with Caleb Ewan taking the points in a tight sprint finish at Lyndoch, normal life had resumed at One Tree Hill, the town resuming its summer slumber.

The 148.5 stage two of the Tour Down Under takes place tomorrow with cyclists riding from Stirling to Paracombe.

Sunday sees the Tour Down Under finish with a street race in Adelaide.