Old Tom author Leigh Hobbs is heading to the Shedley 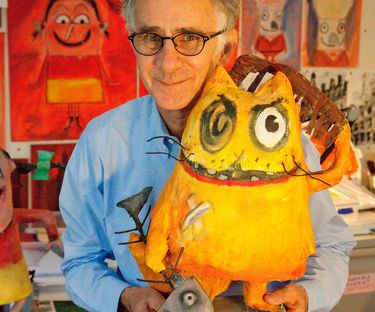 Share this article
Creator of loveable characters Old Tom, Horrible Harriet, Mr Chicken will be holding a FREE interactive illustration workshop on the 24 May.

Creator of loveable characters Old Tom, Horrible Harriet, Mr Chicken will be holding a FREE interactive illustration workshop on the 24 May. ^^Leigh Hobbs with Character Old Tom (photo by Robert Littlewood) Your kids may have grown up with the likes of that pesky feline Old Tom or the globe-trotting antics of Mr Chicken and now they can create their very own. On Wednesday, 24 May the library will be holding a FREE interactive workshop with author/illustrator and Australian Children’s Laureate for 2016/17, Leigh Hobbs.

Children will learn how to draw some of Leigh’s characters and then design their very own character.

“The children, and adults if they would like, will draw the characters Old Tom and Mr Chicken and create a character of their own,” Leigh said.^^Old Tom television series that aired early 2000s During the hour-long session children can also learn more about the characters and their roles in Leigh Hobbs’ books.

Leigh has been drawing throughout his life and still uses the drawing board his father made for him when he was six years old. He continues to draw using an ink and nib pen and then photocopies his work to enlarge his original sketches.

Leigh advises children interested in a career in writing and art to get a good sketchbook and make it their own.

“This is your (sketch) book, your world to draw anything you like to draw in it,” Leigh said. “You don’t have to show it to anyone unless you want to. It’s important for you to have a space where you can be creative and not be judged or to be competitive.

“Keep drawing, keep working at it, keep going and over time you will find that your drawing will develop.” Bookings can be made here.FREE interactive workshop with Leigh Hobbs