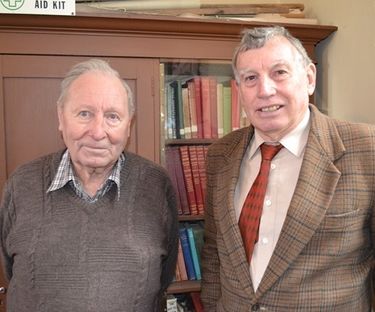 Share this article
<p>He only had a short teaching career, but One Tree Hill’s Neil McKenzie (pictured left, with school 'principal' Phil Squire) looks back on his time at Uleybury School fondly.

He only had a short teaching career, but One Tree Hill’s Neil McKenzie (pictured left, with school 'principal' Phil Squire) looks back on his time at Uleybury School fondly. The former educator not only took his first tentative steps into employment as an assistant teacher at the school, but he was also a student there.

It was his combined history at the school that saw him visit Uleybury for Tuesday’s 160th anniversary celebrations on Tuesday, October 12.

Having completed his own schooling at Uleybury, Mr McKenzie took on the assistant teacher’s role in 1950, corralling the year one to three students – teaching them the three Rs of reading, writing and ‘rithmetic.

“I was just out of school and they (school staff) talked me into being a school teacher,” Mr McKenzie recalled. “The department used to send you out as a student teacher and then they would take you in at teachers’ college.”

The man who “talked” Mr McKenzie into becoming a teacher was the then headmaster Bill Walker, regarded as one of One Tree Hill’s finest ever cricketers.

Recalling his time as an assistant teacher, Mr McKenzie said his year at the school was enjoyable. “The kids all knew me,” he said. “But kids in those days were well-behaved anyway.”

Following his year at the school, Mr McKenzie (pictured below as a teacher's assistant) then attended teacher’s college, before gaining his first appointment on the Eyre Peninsula. After three years, the call of farming brought Mr McKenzie back to One Tree Hill and the family property, which he ran for the remainder of his working life. Tuesday’s free celebration at Uleybury brought many visitors to the school house, where Phil Squire conducted one of his popular old-school classes and a variety of games were also played.

An anniversary cake was shared as part of the special celebration.

The Uleybury School Museum can be found at Cornishman’s Hill Road, One Tree Hill, attracts over 1000 visitors every year and is open on Sundays between 1pm and 4pm.

Check out the photos from the 160th birthday celebration.