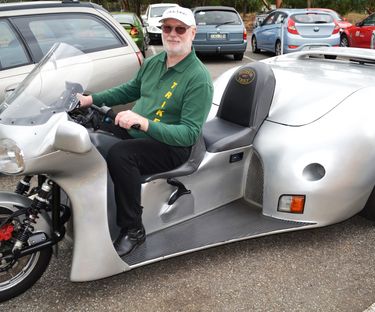 Share this article
FOR SALE: A motor vehicle that is eye-catching and fun to ride.

FOR SALE: A motor vehicle that is eye-catching and fun to ride. ^^ Neil Hudson and his trike. Photo: Rob McLean Smithfield man Neil Hudson is no longer surprised when he sees a car full of wide-eyed and incredulous young men pulling up alongside him at the lights.Instead he braces for the inevitable snap of a photograph and even the occasional question shouted from the window of the neighbouring vehicle.As Neil well knows, life’s like that when you’re out and about riding a trike, a home-made one at that.

“The younger guys with their cameras pull up and take photos and I get a bit of yahooing from them,” Neil said.

“It’s very different, that’s what I like.” Trike talk

Selling for $21,000 Neil, who is part of the Playford Men’s Shed, made the rear part of the trike from a Toyota two-litre MR2, the project taking him five years to complete.

The trike, which was finished in 2007, required special registration for roadworthiness, which he obtained through the Department of Planning, Transport and Infrastructure at Regency Park. ^^ playfordnews.com editor Rob McLean rides the trike with Neil Hudson.A member of the Ulysses Club, a group of veteran motorcyclists, Neil has crafted four trikes, with this being the last the former fitter and turner will make.

Sadly for Neil, it’s now time to sell the trike, which has taken he and his wife, Liz, all around the country.

Neil said he’ll be sad to see the trike go when he eventually sells it and had a word of advice for whoever decides to buy his much-loved vehicle: be prepared to answer lots of questions.

“’What is it?’, is always the first question,” Neil said.