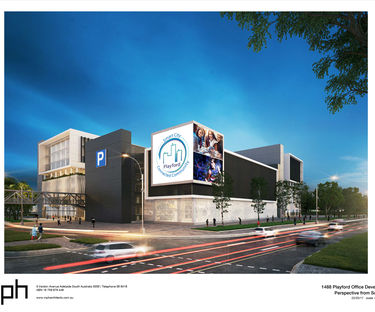 Excitement is clearly building in Playford’s Northern CBD. ^^ Artist impression of the new car park. Photo: Supplied Already investors have secured significant developments around the Prince George Plaza – now we can announce a stunning $7.4 million dollar car park.The six-storey car park will be located on the corner of Main North Road and Philip Highway next to the $20 million Playford Medical Hub.City of Playford Mayor Glenn Docherty said the facility will have the capacity to hold more than 360 vehicles. “This multi-storey car park will help serve the needs of our growing population and is instrumental for other future CBD projects, such as the multi-million dollar Playford (Ice) Arena, reaching their full potential,” Mayor Docherty said. The State Government pledged $1.48 million towards the project as part of $23 million being offered to 26 councils across South Australia under the ‘State Local Government Infrastructure Partnership'.

^^ Surveying the site – Mayor Glenn Docherty at the temporary car park off Playford Boulevard. Photo: Vassil Malandris The balance of the cost of the car park ($5.9m) will be paid for by the proceeds of the sale of the remaining stage sites and construction is expected to begin in August 2017. Further reading:Ice rink plansEntertainment centre program welcomedInvesting in the northLaunching into new medical era