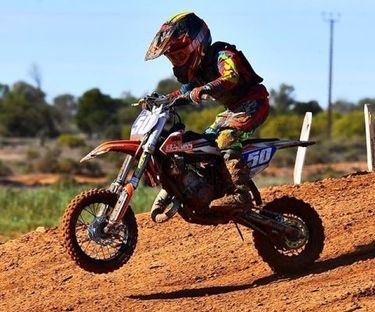 Life moves pretty fast for Waterloo Corner lad Ryder Woodrow, the seven-year-old recently crowned the South Australian champion in his age group in motocross.The Waterloo Corner motocross wiz’s victory is a huge accomplishment, particularly as the minor-place winners in the 50cc seven-to-nine-years-of-age grade were both at the upper end of the category.

To win the title Ryder competed in five races across South Australia and needed a strong finish in the final race of the season.

^^ Click to watch Ryder in action. Photo: Instagram Holding a 10-point lead going into the final round, Ryder gave his best performance of the season to collect a 1/2/1 finish in the three races to finish a huge 25 points ahead of his nearest opponent.

Ryder’s mum Jodie said the young champion is remarkably committed to his sport.

“Ryder sacrifices a lot of social events and friends party, and we travel across the country almost every weekend,” Jodie said.

The Playford resident already has a number of sponsors and is a part of the Daniel Banks Junior Racing Team.

His next challenge is the Australian Junior Nationals in Horsham at the end of this month, where he will represent South Australia from September 30 to October 6. More: The best Ryder in SA Ryder on Insta