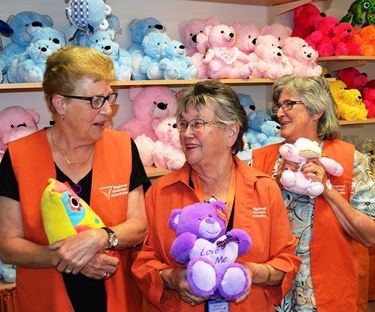 Share this article
When it comes to volunteers, Maxine Henke is among the best, recently winning a major award for her support of the Lyell McEwin Hospital.

When it comes to volunteers, Maxine Henke is among the best, recently winning a major award for her support of the Lyell McEwin Hospital. ^^ Maxine Henke (centre) shares a laugh with fellow Lyell McEwin volunteers Maxine Rouse (left) and Pam Miles. Photo: Rob McLean

Having lived in a rural community for much of her working life, Maxine Henke knows the importance of the work volunteers do.

They are the heart and soul of any organisation, including the Lyell McEwin Hospital, which is based in the City of Playford.

After retirement, Maxine, who had owned and managed post offices in Sedan and relieved at various post offices in this area, was seeking an opportunity to help in the community.

After some time at Ashford Hospital, Maxine transferred her support to the Lyell McEwin.

“I’ve got a lot of connections here in the north,” Maxine said.

“And as a child I lived in the Flinders Ranges and different family members used to come here to the Lyell McEwin, so I was familiar with it.”

Maxine has been volunteering at the Lyell Mac for 13 years and for the past three years has been the president of the hospital’s volunteer association, and is now vice-president.

Her work on the committee, as well as in the gift shop and with the volunteers’ craft group saw her recently named the winner of the Ann Taylor Award, named in honour of a long-time volunteer.

“I feel very honoured and privileged to have won this award,” Maxine said.

“It’s a really good feeling to know that I can help people at the hospital – to be honest, this is the best hospital to volunteer at that I’ve found.”^^ Award winner Maxine Henke (third from left) with Colleen Hogan-Manning, from Hesta Super, Lyell McEwin Volunteer Association president Adrienne White, Scott McMullen, from Northern Adelaide Local Health Network, and Jill Cooper, the LMVA’s volunteer services co-ordinator. Photo: Supplied Hospital volunteers

The Lyell McEwin Volunteer Association, established in 1988, has 600 volunteers supporting the work of the Lyell McEwin Hospital, the greater northern metropolitan area of Adelaide and beyond.

In the wider community, the volunteers support aged-care and respite-care programs, op shops and outings groups.

To become a volunteer, contact the Lyell McEwin Volunteer Association (8182 9651).