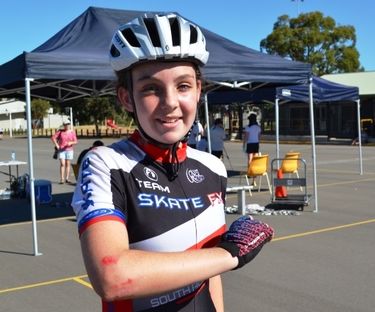 Share this article
The national speed skating titles are taking place at Argana Park in Playford and there’s a local taking the event by storm.

The national speed skating titles are taking place at Argana Park in Playford and there’s a local taking the event by storm. #SmartSports ^ Marlie Wood shows off the scrapes she gained in competition. Photos: Rob McLean There’s nothing like having your sport’s national championships right on your doorstep, and Elizabeth North’s Marlie Wood is finding out how good that is this week.

The 13-year-old Craigmore High School student is one of 95 competitors participating at the national speed skating championships at Argana Park, right across the road from her home.

The home-track advantage has proved so beneficial that Marlie claimed silver in the under-14 three-kilometre race on Monday, the first of three days of road competition.

“It was a good start to the competition,” Marlie said.

Tuesday morning’s race heat tested Marlie’s toughness, as she had a fall and collected a few scrapes, but she was fired up to continue competing. ^ Lining up for a heat race, with Playford girl Marlie Wood in the middle.

Marlie enjoys speed skating because she believes there’s a great opportunity to represent her country, hoping to attend the Oceania Championships next year.

The teenager said she loves the sport after first getting involved at Gawler and now competes for Team Skate FX in club competition.

“You need to be fit and, I think, speed and balance are very important.”

Speed Skating SA vice-president Carly Bryant said the City of Playford and Elizabeth Netball Association have been very supportive of the event, which wraps up at Argana Park tomorrow night.

She said the Elizabeth Downs facilities are of high quality.

“It is a track that meets all requirements and it has lights, and there’s only one other track in Australia that has that facility,” Mrs Bryant said. ^ playfordnews.com discusses the national championships with Carly Bryant. The City of Playford’s Mayor Glenn Docherty was on hand to officially open the event on Monday.

Meanwhile, if you go to the speed skating and also attended Munno Para Primary School and think you’re hearing a familiar voice, you’d be right.

The race commentator for the championships is former MPPS teacher Michael Bryant, now retired, who’s still fit and trim and ready to race, taking second in the masters race.

Racing continues tonight from 6PM at Argana Park, with further competition tomorrow in two sessions – the first at 8:30AM to 11AM, followed by 6PM until about 10PM.

The action then moves to Blackwood Recreation Centre for the track champs (20-21 January) and then the marathon title at Victoria Park Racecourse (22 January). ^ Action continues at Argana Park into tonight and tomorrow.