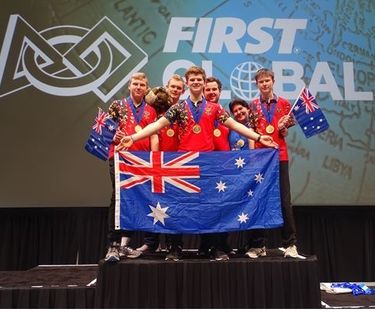 Share this article
A team from Adelaide's northern suburbs has won two gold medals in an Olympic-style international robot challenge in Washington DC.

A team from Adelaide's northern suburbs has won two gold medals in an Olympic-style international robot challenge in Washington DC. The winning Trinity College team. Photo: SuppliedTeam Oceania, from Trinity College, which has schools in Playford and Gawler areas, won the overall competition from a field of 700 competitors from 158 nations. The Gold Einstein Award for International Excellence, recognises the team with the best robot and the highest level of team work and professionalism.The First Global challenge is designed to inspire science and technology innovation in young people from all nations. It required teams to build robots that would work together in alliances. Each team competed in six rounds, with the winners determined by accumulated scores. Though every team was supplied with an identical kit of parts, the robots were all unique.Team Oceania not only competed in the Challenge, it also formed part of the Global STEM Corps, a group of international mentors who supported developing teams. "Mentoring Team Vanuatu and Team Kazakhstan was one of the best parts of FIRST Global, talking with the other teams each week on Skype really helped us develop our own skills, especially when we had to convert our Java Code into Blockly for Vanuatu,” Team Oceania captain Luke Voigt said.