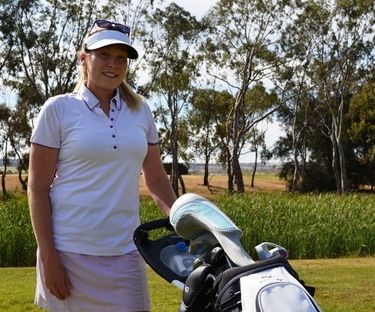 Share this article
The only golf club based within the City of Playford is undergoing a massive change, beginning with its name.

The only golf club based within the City of Playford is undergoing a massive change, beginning with its name. ^^ The newly named Playford Lakes Golf Club is seeking new members, just like Aimee Feltham, who is taking up golf as her netball career winds up. Photo: Rob McLean

Based at the North Lakes Golf Course on Stebonheath Road, Munno Para West, the club is now known as the Playford Lakes Golf Club.

Established in 1994, the club was formerly known as North Lakes Golf Club and has a largely male-dominated membership – a scenario club president Guy Trace is keen to change.

“With the addition of some new committee members this financial year we’ve decided it’s time to market our club to improve our identity in the Playford area,” Mr Trace said.

“The name change to Playford Lakes Golf Club will help with that identity, attracting a broader range of members, including introducing the sport to more women and juniors.”

Mr Trace said the membership is keen to introduce golf to people who are transitioning from sports such as football, soccer and netball.Aimee Feltham is just the sort of person the club is targeting.

A highly-credentialed player with Tango in SA netball’s Premier Division, Feltham is giving golf a bash as she closes in on the end of her time on the court.

Aimee, who plays off a handicap of 21, joined the club to play golf with her dad, David, while her aunty, Jackie Ahl, has since joined the club.“In the beginning I was extremely nervous, but over time I’ve met a lot of people and play in a variety of groups,” she said.

“It’s a very social environment and it’s something I really enjoy, and it’s a lot less strenuous on the body than netball.”

The club is in an excellent financial position and also has plans to expand its clubrooms, providing a more up-to-date facility, along with a pro shop, allowing members to socialise around their golfing activities.

Check out the golf club in the video above. ^