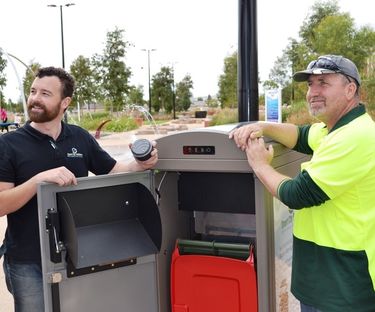 Share this article
Lasers, sensors and smart bins are the future of waste management and the City of Playford is currently undertaking a trial to see how it can integrate that technology into its programs.

Lasers, sensors and smart bins are the future of waste management and the City of Playford is currently undertaking a trial to see how it can integrate that technology into its programs. ^^ Smart City Solutions chief executive Luke Johnston and City of Playford staff member Ron Clancy with the Clean Cube and a Clean Sensor. Photo: Rob McLean Over the next month, the City of Playford will be trialling a self-compacting bin, called the Clean Cube 120, and Clean Cap waste sensors at the popular Playford Town Park at Munno Para.Sensors are also being deployed in locations at Virginia, One Tree Hill, Angle Vale and at Elizabeth.The City of Playford is the first local government organisation to trial the bin, manufactured by Smart City Solutions, and the sensors in one program.The clean-tech bin and the sensors (placed inside already installed bins) ‘talk’ to a cloud-based platform that updates waste managers as to when rubbish collection is required.Mayor Glenn Docherty said the trial of the clean-tech bin and sensors will allow Council to look at its future waste disposal programs.“Over the coming four weeks we will collect data from a self-compacting waste bin and a series of sensors installed on our regular waste bins, this data will be used to understand how waste pick up can be optimised in our community, creating true smart-service delivery,” Mayor Docherty said. ^^ How does it work?Smart City Solutions chief executive Luke Johnston said the Clean Cube automatically compacts when rubbish breaches an internal laser beam, while Clean Cap sensors work in a similar manner to indicate, via wireless communications, when bins should be emptied.The innovative Clean Cube houses a standard 120-litre bin, has in-built sensors, features an LCD screen on the outside for community messaging and can work as a WiFi hotspot.Mr Johnston said the smart technology means Council staff can be allocated other jobs, rather than checking on a bin that doesn’t yet require emptying.The Clean Cube can also communicate any other issues that may be occurring at the site.“It will ‘talk’ to our clean city network and let our client know when it’s full, if there’s a sensor issue, if the door’s open, if the bin’s been vandalised, if there’s something hit or miss with it, it’ll let us know,” Mr Johnston said.Mr Docherty said the data from the trial will be used to understand how Council can improve its service and “look to using waste-level sensing across the whole of our waste pick-up service”.