Kol and Helen live life to the full 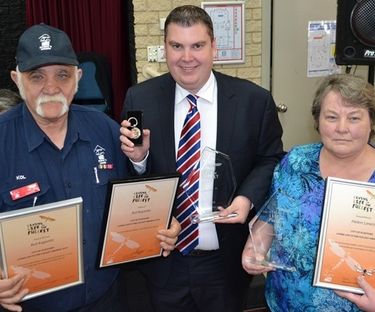 Share this article
Kol Kojanto and Helen Lewis are two local volunteers living life to the fullest and their efforts were recognised at the Grenville Community Connections Hub this week.

Kol Kojanto and Helen Lewis are two local volunteers living life to the fullest and their efforts were recognised at the Grenville Community Connections Hub this week. The volunteer pair received the Living Life To The Fullest Award from City of Playford Mayor Glenn Docherty in a presentation at the Grenville Centre on Monday. Mayor Docherty said the annual awards recognise the importance of living a life that is vibrant, fun and fulfilling. “Award recipients are chosen from community members who represent positive ageing in their daily lives and who challenge the stereotypes associated with older people,” Mayor Docherty said. Helen was unable to attend the occasion, with her award accepted on her behalf by City of Playford Councillor Shirley Halls.The awards were presented following a stirring performance from Playford’s wonderful Silver Beat rock choir, with all 15 nominees recognised by an enthusiastic audience.Among the nominees were John Skidmore and Bernardette James, who received highly commended certificates for their significant community contributions.

Award nominees:Kol Kojanto, Helen Lewis (winners), John Skidmore, Bernardette James (highly commended), Ken Caruthers, Peter and Betty Webb, Liz Height, Gail Sweet, John Skidmore, Sue Goode, Rolf Retelsdorf, Joy McKenzie, Bill Ostler, Peter Hornsblow, Connie Hopewell. Winners’ biographies:Kol Kojanto - Ex-military, Kol has a real passion for making a difference. He brings a joyful presence to everything in which he is involved. Nothing is too hard for him. Even when he is unwell, his commitment to the Playford Men’s Shed and his role as secretary and team leader is inspiring.Kol is instrumental in the development of many of the Men’s Shed’s community projects, especially the mud kitchens and Elizabeth Rise Community Safety Project furniture. Helen Lewis - Volunteered for many years with Housing SA and, despite her ongoing severe and debilitating health issues, continues to put other people first, through volunteering at the Lyell McEwin Health Service, where she visits people who are undergoing chemotherapy. Helen ensures those who do not receive any visitors don’t miss out on seeing a smiling face and someone to talk to.She is a proactive fundraiser, raising money for the Lyell McEwin Health Service and the Playford Christmas pageant, which she also helps organise, ensuring its success. Previous winners: May Dunlop (2010), Colleen Kirby (2011), Trudy Robat, Reg Driver (2012), Gladys Humphries, Cesare Alberton (2013), Lily Boyce, Robert Couzens (2014), Bob Lammerton, Helen Driver (2015).