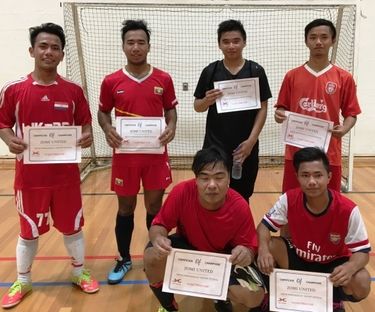 Share this article
Sometimes sport is about more than just kicking a ball and in the case of the soccer team Zomi United that is certainly true.

Sometimes sport is about more than just kicking a ball and in the case of the soccer team Zomi United that is certainly true. ^^ Zomi United captain Hang Naulak, pictured with John McVeity Centre's Ben Whalan, said playing soccer at the facility helps keep him connected with his community.

Photo: Rob McLean The team of young men, who play at the Playford-based John McVeity Centre, are all refugees from Myanmar, members of the Zomi community who have fled religious and racial persecution in their country.

For Zomi United, playing soccer at the JMC is a way of keeping a connection with their community and their troubled country.

“Sometimes it’s hard to keep in touch, so this is a way to get together as a community and do something we love, which is soccer,” team captain Hang Naulak said.

“It feels like we are closer to home when we play.”

When growing up, many of the players could not afford to purchase a soccer ball, so found unconventional ways to play.

“It’s expensive in Burma to get a soccer ball, so we’d collect plastic and make one – playing with a proper ball is very different,” Hang said.Zomi United, which recently won the JMC’s summer season division two grand final, enjoys playing at the Smithfield Plains facility.

“We will be back during the new season, we love it here,” Hang said.

The new winter soccer season starts tomorrow night and team nominations can still be made.