How the Housing Trust built a city 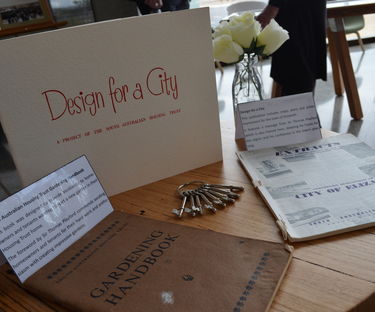 Share this article
&nbsp;&nbsp;‘Building a city’ is the theme of a display about the history of community housing in the northern suburbs which opened at the Stretton Centre this week.

‘Building a city’ is the theme of a display about the history of community housing in the northern suburbs which opened at the Stretton Centre this week. The memorabilia display, which includes historical artwork and photography, tells the story of how Housing SA (formerly the South Australian Housing Trust) has shaped Elizabeth and the northern suburbs. The area now known as the City of Playford was part of an innovative plan to develop a community in which people could live, work and play, with the Housing Trust at the project’s forefront. At the launch, City of Playford Mayor Glenn Docherty described the exhibition as a fantastic way to celebrate “our rich and diverse history”. “…Particularly (celebrating) an organisation and institution that has helped to shape the lives of our community, not just in a physical sense from a town planning point of view, but also how it’s changed the lives of people that represent our community,” Mayor Docherty said. The mayor added that the Playford area has been pivotal in the development of South Australia, particularly after World War II, with community housing fundamental in that progress.“The memorabilia gives us glimpses of a time gone by but also a chance to look to the future,” he said. Among the pieces on display is the golden tap, once thought lost, with which Queen Elizabeth II turned on the Windsor Green fountain during her 1963 visit, along with a book which was given to new residents regarding garden maintenance and other expectations. The exhibition, on display until mid-December, is being held at the Stretton Centre, which is named in honour of the late Hugh Stretton, who played a major role in Housing SA’s ongoing commitment to community housing.A flashback to Elizabeth's beginnings.