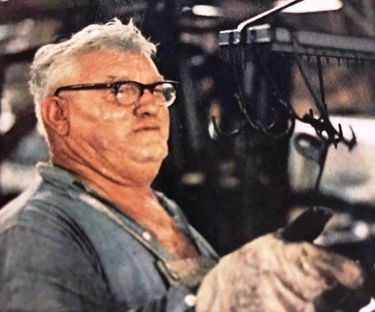 Share this article
When the City of Playford sought photographs from our community to pay tribute to the Holden’s Elizabeth plant ahead of its October 20 closure, we were overwhelmed by the huge response.

When the City of Playford sought photographs from our community to pay tribute to the Holden’s Elizabeth plant ahead of its October 20 closure, we were overwhelmed by the huge response.Here’s a sample of just some of the memories sent from former employees of Holden and others who love the contribution the vehicle manufacturer has made to local and Australian history.• Mick Thompson’s family has a long history of working at the Elizabeth plant. His grandfather is pictured at work in the 1960s, while his father drives a truck in the early 1990s. Mick’s brother Chris works in the paint shop and will be there on the final day – October 20. • Wendy Reid (above) attends a Holden Christmas party as a child while Wendy Beaton (below) uses a chair presented to staff as a Christmas gift in 1989.

• Jo Dene’s photo was of her grandfather and Holden employee Robert Temple driving an FC Holden. In the back seat is her father, Tim, who also later worked at the plant. The photo was taken in Broadmeadows and the local school can be seen in the background. The house next door still stands today.

• Hanna Smith’s photo features the 2015 cohort of co-operative students at the Holden Elizabeth plant. The program allowed undergraduates in the fields of engineering, supply chain and logistics, IT and HR to work in their chosen field as part of their degree.

• Jude Knight sent in a beautiful photo of her family car at a picnic on the banks of Light River at Roseworthy in the 1960s. Holden will host a Dream Cruise in Elizabeth this Sunday as a public farewell to car manufacturing in Australia. The cruise will be the major public event to mark Holden’s closure and is expected to attract hundreds of devotees from all over the nation.