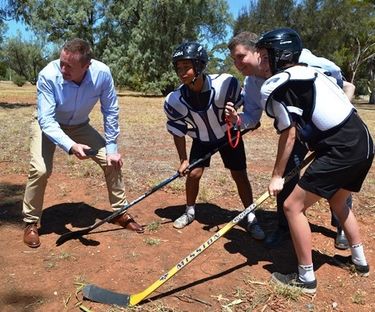 Share this article
Two budding ice hockey stars have given the seal of approval to plans for a $40 million Playford Arena being built by developers at Elizabeth.

Two budding ice hockey stars have given the seal of approval to plans for a $40 million Playford Arena being built by developers at Elizabeth.

The pair already plays ice hockey and look forward to doing so in their own backyard at the Playford Arena – just five minutes from their school.

“It was a little bit of a shock that it was so close, I didn’t expect anything to be so close to here,” ice hockey player Megan Walker said of the development.

“It’s a great opportunity to work on my hockey skills, with the Arena so close."

For Heman, not only is the Playford Arena close to his school, but also his home – adding new and long-awaited social, recreational, entertainment and employment opportunities for himself and teenagers like him in Adelaide’s north.

It was announced earlier this month that the Playford Arena developers had secured a $10 million loan from the State Government to allow the project to proceed, with the City of Playford endorsing the proposal.

Through the project, secured by the City of Playford as part of its Next Great City project, the Playford Arena will annually invest $130,000 into social-inclusion programs.

The Playford Arena is one of two winter sport venues proposed by Ice Rinks Adelaide, with the second located south of Adelaide.

Construction on the Playford Arena, which will also be a venue for other ice sports, rock climbing and an entertainment and dining venue, is expected to commence in the middle of this year, with completion due in late 2019.