Green light: Playford Arena gets the go ahead 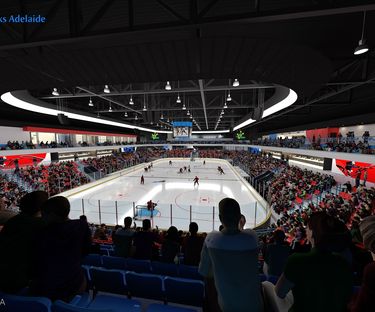 Share this article
The City of Playford is delighted to announce that&nbsp;the Playford Arena was the preferred development in the State Government’s expression of interest process for an ice sports facility in SA.

The City of Playford is delighted to announce that the Playford Arena was the preferred development in the State Government’s expression of interest process for an ice sports facility in SA.

The State Government has provided a 10-year interest free loan of $10 million to the Playford Council. Council will then administer the loan on behalf of the State Government to the developer, Ice Rinks Adelaide, who will pay the loan back to Council.

“This is an extraordinary opportunity for the north as this significant development comes at no cost to the ratepayers of Playford,” City of Playford Mayor Glenn Docherty said.

“This will enable Playford Arena to host World Championships in ice sports including ice hockey, figure skating and broomball, and the new Olympic sport of rock climbing,” Mr Campbell said.

An integral component of the revitalisation of Adelaide’s north following the closure of the General Motors Holden plant in October last year, Mayor Glenn Docherty said the news is exciting, as it provides the next link in the development of the $274m northern CBD. Community benefits

“This project is critical to transitioning our economy and stimulating other developments such as a luxury 4.5 star hotel planned for our CBD of the North,” Mayor Docherty said.

“Through this project, more investment will take place in our community, creating more jobs and much needed tourism dollars for people in the fastest-growing community in South Australia.

“Not only will people come to our community to visit the arena, but they will stay in the proposed hotel and they will visit places such as Tenafeate Creek Wines, Sneaky’s at Angle Vale and even Para Wirra Conservation Park.

“The facility will also be the second-largest indoor entertainment arena in Adelaide, providing another location for major events, conferences and concerts.”

Major sporting and entertainment events are already being planned for the venue.

Programs providing personal development and career pathway opportunities for at-risk students will also be provided at the Playford Arena, with the developer allocating $130,000 a year towards social-inclusion activities.

Playford Arena will produce over 340 construction jobs, along with ongoing employment for 140 to 160 (70 FTE) people upon completion with an estimated 5000 visitors to the venue each week.

Work will start on construction of Playford Arena by mid-2018, with the facility expected to open to the public late next year.

Facts about the Playford Arena

Project welcomedPlaza launched with a splash