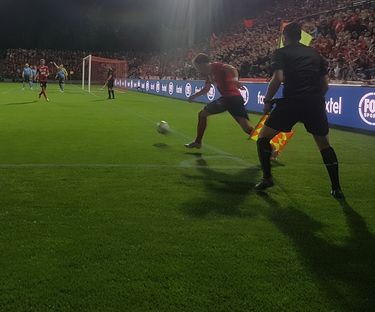 The former Munno Para City player scored a brace of goals, one in each half, to set the match alight in a performance that will long live in the memory of Reds fans.

Goodwin returned to the Reds this season after a European stint with Sparta Rotterdam and last night's performance would have been viewed with much interest by Socceroos' coach Graham Arnold.

The attacking midfielder's opening goal came in the 25th minute, firing over the wall from a free kick just outside the box.

The second half saw Adelaide again dominate, but unable to break the deadlock, until Goodwin fired a scorcher into the top right of the net in the 74th minute, sending the 14,448 crowd into a state of euphoria.

With time still on the clock, Sydney surged, forcing Paul Izzo into one very good save (while a streaker also provided amusement) but Adelaide was not to be denied the win.

It was a big night at Hindmarsh, further reinforcing the positive feel around the AUFC supporter base following the purchase of the club by new owners late last season.

Attention now turns towards the season proper, with A-League hopes refreshed, as long as the Reds can find another goalscorer to support the sublime talents of Socceroos-bound Goodwin.