Get your Fringe on at the Grenville 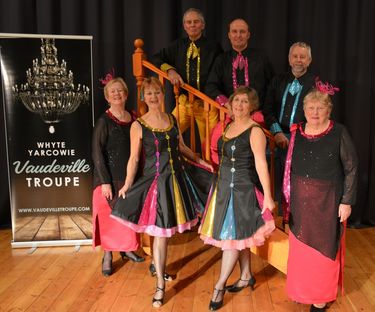 Share this article
The stuff you don’t hear any more – that’s what you’re going to hear at the Adelaide Fringe Festival shows being hosted by the Grenville Community Connections Hub this month.

The stuff you don’t hear any more – that’s what you’re going to hear at the Adelaide Fringe Festival shows being hosted by the Grenville Community Connections Hub this month. ^^ The Barrington Six will be part of the Grenville Fringe this weekend. Photos: Supplied From vaudeville to spirituals and band music, there’s much to love about the music that will be performed by the Whyte Yarcowie Vaudeville Troupe and the Barrington Six for this year’s Grenville Fringe. Vaudeville veterans

^^ All the sounds of vaudeville will be performed at the Grenville Fringe this Sunday. Whyte Yarcowie Vaudeville Troupe has been treading the boards together since 1983.

You can expect comedy song and dance routines that will make you smile and laugh.

“The main comment I get from people when we perform is, ‘you just don’t hear these songs anymore,” performer Judy Lewis told playfordnews When: Sunday, February 19 (1.30pm)

Cost: $15 (show only) or with roast lunch ($30). Tickets available here Bold as brass ^^ The Barrington Six are named after a road in Elizabeth Downs.

The Barrington Six have only been together for a relatively short time and take their name from Barrington Road in Elizabeth Downs where the band rehearses.

Drawn mostly from members of the Salisbury City Band, the band performs old favourites such as Just A Closer Walk With Thee, Something Stupid and When I’m 64.

“It’s quite a celebration of that sort of music, and good fun,” cornet player Mike Ward said. When: Sunday, February 19 (11am)

Why not make a day of it, enjoy lunch and catch both shows for just $40.

For more information, visit the Grenville Community Connections Hub on Facebook, or ring 8256 0377.