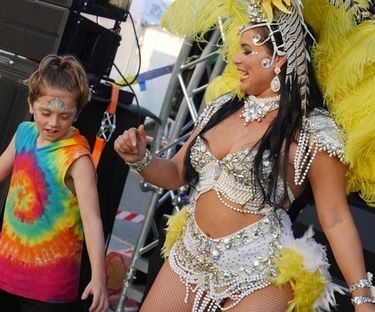 Share this article
The first Playford Palace event has been given a right-royal send off, heralding the end of the first local two-day Adelaide Fringe Festival event.

The first Playford Palace event has been given a right-royal send off, heralding the end of the first local two-day Adelaide Fringe Festival event.

The garden party attracted a great response from the northern community.

“We had up to 3000 people come through the palace gates across Friday evening and on Saturday,” Mayor Docherty said.

“We had huge crowds on both nights at the Shedley Theatre for Aussie comedy royalty Dave Hughes and tribute musician Greg Hart.”There was something for everyone at the palace, with the kids enjoying Once Upon a Princess and CirKidz, as well as smart-tech workshops in the Digital Dungeon, aka Civic Centre Library.For the older audiences La Bomba, the Australian Tamil Arts group, Keep The Change and Satisfaction – The Stones Show kept people dancing into the night.Local arts

Over the weekend, the Playford Palace showcased musicians and artists from the northern suburbs.

“It was brilliant to have local students from Playford International College showcasing their many talents, the Northern Light Theatre Company, who gave us a sneak peek into their upcoming musical, as well as emerging musicians Hannah Yates and Liam Halford,” Mayor Docherty said.

Visual arts also played a big role in the event, with The Lion and The Unicorn exhibition.

Mayor Docherty said the exhibition was truly unique to Playford, with old car doors transformed into beautiful pieces of work, as part of the Royal REVolution art competition.

“Congratulations to all the artists who were part of The Lion and The Unicorn exhibition, especially our winners including our new King – Steve Oatway, Queen – Lorelei Siegloff, Northern Crown – Julie Aldridge and Kaurna Shield – Kera Watts,” Mayor Docherty said. ^^ Lion and The Unicorn Exhibition winners (from left) Julie Aldridge (Northern Crown), Steve Oatway (King) and Lorelei Siegloff (Queen). Photos: Kate Hayward “I speak on behalf of all the judges when I say it was a tough decision and in some instances only one point in it."

These car-door artworks will be on display at the Playford Civic Centre throughout the Adelaide Fringe (concluding on 19 March).

“The Playford Palace two-day festival has demonstrated how strong and proud our arts community is, while also showcasing the talent of emerging artists,” Mayor Docherty said.

“We can’t wait to develop on the vibrancy that events like these provide to our community through the activation of our developing CBD and precincts across all of Playford.”