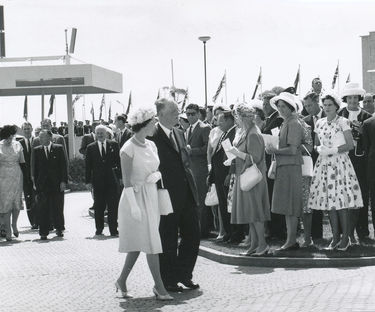 Share this article
Today, 21 February, is the anniversary of Her Majesty Queen Elizabeth’s first visit to the community named in her honour.

Today, 21 February, is the anniversary of Her Majesty Queen Elizabeth’s first visit to the community named in her honour.

The City of Playford’s heritage co-ordinator Daina Pocius takes a look back at the historic occasion.

Her Majesty Queen Elizabeth II visited Elizabeth on 21 February, 1963, 55 years ago, a most momentous occasion in the history of Elizabeth.

The Queen, accompanied by the Duke of Edinburgh, first visited General Motors Holdens factory after which they were welcomed to the district by the Chairman of the South Australian Housing Trust, Mr. J.P. Cartledge at Windsor Green.

The festive air around Windsor Green, provided by flags, bunting and decorated shields on lamp posts, was continued down the Royal route along Philip Highway, where thousands more lined each side of the roads to see the Queen.

In his welcoming speech Mr Cartledge expressed “our appreciation of the honour extended to our town by your visit. The town has previously been favoured when, in November 1955, your Majesty graciously approved of it being distinguished by the name of Elizabeth. The name was the finest gift ever bestowed upon a town”.

A gift for the Queen

The Queen was presented with a fine lambs’ wool knee rug mad by Mrs L.L. Mann.

Made from eight of the finest quality Australian lamb skins, it took several months to make.

In her speech, the Queen said she had taken an interest in the progress of Elizabeth ever since the Premier, Sir Thomas Playford, had asked that it be given her name.

She then unveiled Mr. G. Shedley’s fountain sculpture and turned a gold tap to start the flow of water.

The Royal party inspected the dancing figures statue and were then driven to Ridley Road Reserve, where all of the 17,000 schoolchildren of the district, were lined up for her.

After the Queen had left Elizabeth, a grand Royal Visit Variety Concert in the evening rounded off the day’s celebrations on Ridley Reserve.

Presented by the District Council of Salisbury, in association with the Elizabeth Arts Council, admittance was free and those attending were treated to performances by a wide range of well-known performers and including the local groups, the Salisbury & Elizabeth Brass Band, the Vectormen and the Elizabeth Singers.

To learn more about the City of Playford's history, contact the Playford Library via Facebook or ring 8256 0334.